The principle of restoration is removing undesirable interference in the water regime (e.g. draining) and letting nature to consequently regenerate itself. Through revitalisation, water is returned to wetlands or efforts are taken to ensure such mires do not needlessly lose water, thus stopping the process through which mires gradually turn into drier habitats due to drainage or other interventions.

Revitalisation measures are not solely focused on drained mires, but rather on the overall improvement of the impaired water regime in the landscape. The intention is to restore the conditions that would exist in the locations if the draining had not been implemented. Small river subcatchments as a whole are always addressed, preferentially in spring areas. How exactly are the Šumava peat bogs to be restored?

In a coherent manner

The technical solution is based on long-term experience (restoration of Šumava’s peat bogs has been in progress for more than twenty years; and even longer for bogs worldwide) and very detailed knowledge of the specific area. There is no miraculous or all-encompassing pattern, even though similar methods are used for the same biotopes in different places. The revitalisation principle is fairly simple: first it is necessary to discontinue the drainage channels and then restore natural flows in the landscape.

The groundwater level must be increased in the drained areas, and its fluctuation and fast outflow must be prevented. In so doing, wetlands are not watered chaotically, as revitalisation is based on the “target water level” conception. This means that the groundwater level returns to the level that corresponds to the pre-draining natural condition. Such a level varies in each type of peat bog or mire, so each revitalisation must be well-calculated and prepared. In the raised bogs, for instance, the goal is to increase the groundwater level to the level of approximately 5 centimetres below the surface, while this level is usually 20–30 centimetres lower in bog woodlands. However, the technical implementation of revitalisation is usually very difficult in poorly accessible and sloping mountainous terrain, because of the shortage of material for complete refilling of the channels, and where there is also the threat of a washout of the new water outflow even below the landfill.

The restoration principle is relatively simple. It is necessary to block all functioning artificial drainage ditches, renew natural capillary streams, and if possible, re-establish the original movement of water through wetlands. One of the methods to block the ditches is to install transverse wooden dams and then refill the channels with soil and natural materials. Cascading a large number of barriers is necessary in sloping terrain as it is the only method to increase the groundwater level along the channel length. The target water table, together with the terrain slope, specifies the number and exact distribution of the barriers in the given channel section. The works are carried out in mountainous terrain, so unless the barriers are embedded in the ground and banks, simple refilling of the channels by soil would be insufficient. Water is very powerful and it would be likely to find a way under the channel filling, flowing away on the bottom, under a layer of soil. Wooden dams must also be used because there is usually a lack of soil in the places being revitalised and the channels cannot be filled entirely. Partial soil filling of the spaces between the barriers is essential, because it prevents erosion and breakthrough of the channels. It also accelerates their integration, i.e. filling up with material and overgrowing with wetland vegetation. The channels gradually lose their draining function and subsequently “disappear” – blending into the landscape. Blocked channels between the barriers are usually filled to 2/3 of their volume. Another important revitalisation step is the recreation of natural water flow in wetlands. The concentrated water outflow through the channels is suppressed and water is distributed to the mire area. Efforts are made to re-establish the correct subsurface water flow direction. All the minor (capillary) natural brooklets, formerly drained to the channels, are restored after blocking the channels. 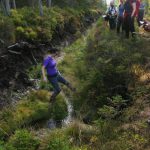 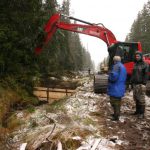 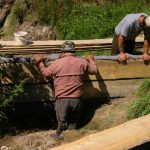 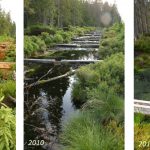 In addition to wetlands, also small mountain streams that were regulated, i.e. straightened and trenched in the past, must be regenerated. In such cases, the streams are returned to their former beds, recovering their natural form and especially dynamics. This means they return to the form of shallow streams (approximately 30–40 centimetres deep), with unconsolidated banks and natural geomorphology of the bed, including various pools and still water areas in the meanders as well as shallow, fast-flowing sections between them. Revitalisation does not restore the stream alone, but also its dynamism and linking to the inundation area. Revitalised streams are allowed to overflow their banks and dynamically shape their beds and banks by continuous transportation of sediments. The re-establishment of the inundation area is of utmost importance for the retention and subsequent entry of water into the soil after extreme precipitation. It also significantly damps and retards flood waves, and effectively captures rain-washed nutrients and returns them into circulation. 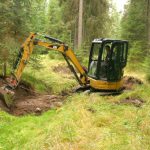 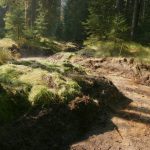 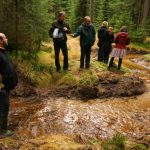 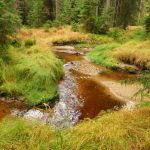 On a long-term and integral basis

Drainage can be implemented relatively easily and quickly. Biotope degradation (reduction in the peat bog size, drying of the peaty and wet meadows, brush overgrowth) on the other hand is much slower, sometimes creeping, but steady. Remediation is trickier. Although regeneration of a certain location is basically a one-off measure, the multitude of damaged areas within the territory makes it a long process. The Šumava mire revitalisation has been in progress since 1999 as part of the long-term “Šumava Mire and Peat Bog Restoration Programme”. The programme’s conception specifies the principal approach, rules, technological procedures, as well as the order of locations to be revitalised. Prioritisation is based on several criteria: location value; degree of damage; how much can be saved; technical feasibility; and costliness.

The basic principle is tackling minor, but preferably integral subcatchments (i.e. areas from which water flows into a certain stream). Each mire and peat bog is therefore not addressed separately, but always in the context of its surroundings, to which it is linked by water.

Sensitively and with consideration

“Medicine must not be more bitter than the disease.” Incorrectly implemented revitalisation is likely to cause damage when disregarding the vulnerability of sensitive biotopes to be revitalised. Therefore, most works are carried out at the lowest water levels and in the periods when rare animal species dependent on wetlands have already brought up their young. The most suitable period is late summer and autumn when capercaillies and black grouse, for instance, have already finished courting, the chicks have grown up, are becoming independent and are less irritated by the nuisance. Rare plant habitats (e.g. marshes for orchids) are mapped in advance and carefully monitored in order to remain intact. Works are carried out manually in the most sensitive and poorly accessible areas. The work teams have no more than five members in order to prevent compacting the peat layers and destroying the vegetation that creates the peat, and so that access paths do not transform into new brooklets that drain water. If possible (for instance, in highly eroded, dry, and damaged areas), light forest machinery is used for material transportation and ground work. There are strictly set routes for the machinery, usually travelling alongside the channels. Machinery is especially helpful in demolishing the artificially piled-up banks back into channels, and in the installation of barriers.

Restoration measures are subcontracted. But people are part of the landscape and many of them desire to do something useful for nature and the landscape, and so we are glad when civilians join us – for instance, as volunteers during the “Dny pro rašeliniště” (Days for Mires). They spend the morning working in the mires, and visit beautiful preserved areas in the afternoon, where unspoilt mires and peat bogs can be seen in their full glory. Volunteers are not there to do some purely cosmetic improvements of already regenerated locations – it is necessary to check the wooden dams, seal the pervious areas where water has found its way through, and/or help return mire vegetation to the blocked channels. These works are seemingly minor, but essential.