Water resembles man in many ways – for instance, it seeks the easiest path, and you would have to force it to go uphill. And because water repeats the easy paths over and over, it gives rise to springs, streams, creeks, rivers, major rivers. Sometimes they gain too much energy flowing from the mountains and gnaw out new courses, sink in the substrate – and lo and behold, there’s a valley! Their energy comes from the sun – sea water returns to the spring areas in the mountains or other, mostly cold areas in the form of water vapour that cools down, condenses, and falls down as rain.

Life of a river A spring can be a well-groomed fountain, but more often it is a wetland from which one or more small rivulets flow out; springs on the bottom of natural or artificial lakes are no exceptions. Several rivulets merge to form a stream, which then usually gets a name. In the initial stage of their lives, rivers tend to be fierce – taking away more than they deposit, washing away stones, gravel, and bit by bit whole mountains. With kilometres of length and metres of width, the pace slackens. And the river bed undulates – the river extracts material on the impact side (and forms deep pools where you might find pike lurking, but also high, undercut banks), while on the opposite side, material tends to deposit and form sand banks. Straight sections between the bends often comprise rapids or shallow parts with rushing water – ford crossings. Braided rivers on hillsides (like, for example, the Bečva River in Moravia) do not tend to undulate much – during floods, they create a bed even several dozen metres wide, while flowing in several beds, often divided by gravel drifts, under normal discharges.

Unless a river is deprived of its name by a stronger one at a confluence, it continues its course – as a lowland river. An elderly lady, carrying water much more slowly, who prefers indirect routes and sometimes forks the channels in a way similar to the Amazon – a river arm here, a fourth parallel through-flow channel there, and the main stream is almost invisible under the nettles and thriving vegetation. The best example of this is the Litovelské Pomoraví Protected Landscape Area. When a meander bends too much, the thin neck breaks when a flood comes, the river straightens, and the meander, now an oxbow, slowly silts up and overgrows. In these parts, the river mostly carries fine sands and clays, and deposits them, sometimes bringing so much of them that it then flow on its own sediments – in fact, raises the bed above the surrounding terrain. In Šumava, nice meanders can be found on the Vltava in a section called Vltavský luh (Vltava Flood Plain) – far from being a lowland river, the Vltava nonetheless beautifully meanders under the Soumarský Bridge at an altitude exceeding 750 metres and behaves like a river that is close to entering the sea. But being located in cold mountains and surrounded by peat bogs, the Vltava most of all resembles lowland rivers of the far north. Life in a river

Water is full of life (unless we percolate it with chlorine). River life changes with the water temperature and the amount of light and oxygen. The upper course contains crystal clear water – low in nutrients, cold, and well-oxygenated. The middle course tends to be warmer, with less light towards the bottom, and a medium level of oxygen. And the slow, warm, meandering river in the lowlands is very low in oxygen, but nutrients are at maximum (nitrates washed away from cultivated fields are “extra”). All of this changes life in the river, both flora and fauna.

In the wells and deep springs, tiny creatures, colourless and without eyes, patiently wait in the cold water for a bite – edible stuff sometimes fall into a spring. Springs, those exposed to sun, are home to freshwater snails (e.g. Bythinella austriaca) and common water moss. Spring basins and rivulets, too small for a trout to turn around in, are ideal for freshwater shrimp (agile crustaceans, about one centimetre long), Turbellaria flatworms living pressed against the stones, and horsehair worms, more than ten centimetres long and yes, resembling horsehair.

When a rivulet can be called a stream, you will most probably see trout, European bullheads (“water dragons”), and the marvelous, cyclostomatous European brook lamprey, a fish that spends most of its life as a larva – ammocoete – buried in fine sediments, filter feeding with its round mouth. Adults only live for several days or weeks – they simply deposit eggs, create a new generation, and die. The lamprey larvae enjoy a longer life, usually four to five years in our streams.

Streams and rivers also provide a habitat to land invertebrates who spend most of their lives as aquatic larvae. Mayflies are not short-lived, though the saying claims otherwise – their larvae live for several years in water, while the adults die shortly after their wedding dance above surface. You can also see caddisflies, “water builders” or “living wood”, who build houses from small stones and bits of wood. Others, however, do not care a bit for building and prefer hunting using nets, waiting for what comes in the flow. Larvae living in the water flow are sometimes taken downstream – and the winged adults have to fly up river, so that the new generation can again drift downstream. And some have “taxi cabs” for that – for example, larvae of freshwater pearl mussels, tiny glochidia, cling to the gills of trout, who feed them as well as give them a ride. Adult mussels then only sit in the gravel, waiting for what the river will bring. In the current billow water plants: crowfoot (Batrachium), watermilfoil (Myriophyllum), and starwort (Callitriche). Larger rivers host larger species. With more water – unless the turbines of hydroelectric power plants have flogged them to bits – come grayling, as well as migrating eel and salmon. The river bottom is home to barbel, carp, catfish, white pike, asps, and pikeperch hunt above them. Tubifex worms dig into the bottom, mosquito larvae float on the surface – oxygen is scarce in these waters, so they breathe atmospheric oxygen. You can encounter various mussels here, but also diving bell spiders, predatory great diving beetles, and on the surface, there are pond skaters (insects!) and backswimmers. Afloat, there are water-lilies, delicate green duckweed, while Canadian waterweed often surprises swimmers underwater. The water has turned from clear to brown-green, there is enough heat, there is no fear of drying up. 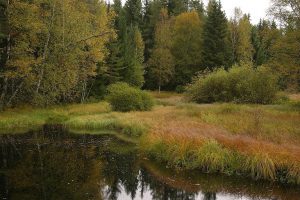 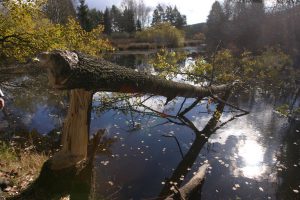 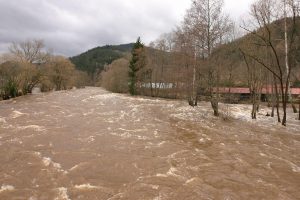 Rivers in our lives

Rivers are a force of nature. They can force water into a mill and carry ships, but they are also capable of taking lives.

The mythical river of forgetfulness, the Lethe, flows into the Styx, the river that flows around the Realm of the Dead.

Rivers have strong religious significance – in Judaism, Christianity, and Hinduism alike. Indians wash away their sins directly in the river, while Christians symbolically at baptism repeat Jesus’s baptism in the Jordan River.

Bridges connect various regions. Many a time, rivers form national frontiers: this bank is ours; but beyond the river… those are the others.

How many cities, town, and villages do you know that are not situated on at least a small river? Settlements surely were not founded on rivers just because of hygiene- and sewage-related reasons, but also due to the exceptional attraction of burbling brooks. They remind us of time gone by, but they also bring new things.

Man has spent a lot of time trying to harness rivers, most intensively in the past few centuries, and our rivers have lost more than a third of their length. Meanders changed into cut-off pools – oxbows – that, at best, remained wetlands (mainly saturated by groundwater), or, at worst, disappeared completely. But water remembers – and if there is plenty of water, it retakes its dominion and flushes the flood plain from above, or groundwater seeps into the former branches, field or no field.

To a large extent, rivers were turned into channels, straightened deep routes with trapezoidal beds, intended to drain water as fast as possible. And what a surprise, the landscape now lacks water all of a sudden, the soil dries out, heats up, cracks. Dams are not a solution, they are more suitable for supplying towns and cities with water or as a source of water for industry. Moreover, there is often not enough water in the river beds – and only the alternately deep and shallow natural bed will still have at least lagoons to which water fauna will concentrate when waiting for rain after a droughty summer. We are trying to fix all of this – to return streams to their natural form, beds must be shallow and wide with variable beds, meandering or braided according to the landscape pattern and suspended materials. And water must have enough room to seek its own route. The starting point must be the forest and the spring – that is why the LIFE for MIRES project does not focus on peat bogs alone, but also on small alpine creeks that gradually become the Otava and the Vltava rivers. And it would be for good if these principles are also established in much more severely damaged river landscapes, in lowlands and agricultural landscapes.